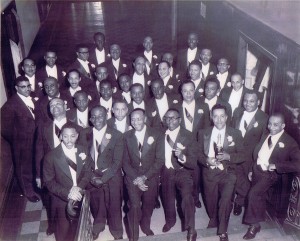 lub is a private African American men’s club in Seattle. It was founded in 1947 by five young men since there was no welcoming venue in the city where black men could socialize. Rooms were available for civic and social clubs to meet. The Fir State Golf Club and the LaClique Club were two groups that met there on a regular basis. During the civil rights era, some leaders in the movement could be seen there plotting strategies. There were fish fries, chitlin struts, and Creole gumbo fundraising dinners. Over some 60 years the club has sought ways to contribute positively to the community in a collegial environment. Today the Royal Esquire Club is located at 5016 Rainier Avenue S in Columbia City.  The founders were Doyle Barner, Frederick Bowmar, William Childress, Freddie Ray, and Joe West. In 1948 they held their first general assembly and elected officers: Leonard DuPree, president; Herb Jackson, secretary; Doyle Barner, vice-president; Troy Bowles, secretary; and Philip Burton (1915-1995). The initial by-laws were drafted by John Prim (1898-1961), a prominent attorney, who in 1954 became the first African American judge in Seattle. He submitted them to the Secretary of State and the club was charted by the State of Washington on April 5, 1948.

In its more than 60 years of existence, the club has moved three times. According to Lincoln Grazette (b. 1926), its oldest member and the first black corrections officer in the state, it started out in a building at 4th Avenue and Yesler Way. One of its members, Frederick Bowmar, had a bail bond office in the building. Later on the club moved to 12th Avenue and Ja 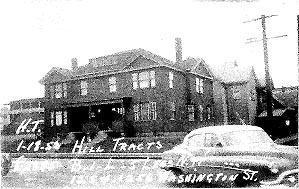 ckson Street, and finally to a house that they purchased at 1254 S Washington Street in 1952. For 33 years members and friends gathered at this two-story frame building to attend dinners, dances, and parties and to sip cocktails and smoke in a congenial, relaxed, and happy atmosphere. Members had their own keys and had the privilege of bringing guests.

Consistent with the club’s goal of contributing to the community, other groups and organizations were recipients of its help. The men served as waiters for the Mary Mahoney Nurses Club and for the Rhinestone Club fund raising lunches. Shirley Gilford, a member of the nurses’ club, remembers how professional they were as they served the tables in their crisp white jackets. These meals were served at Mt. Zion Baptist Church and at the East Cherry YWCA.